Are you feeling lucky? Have a dip at MY Staff Library

I went to the Northern Health & Wellbeing launch event in November and was intrigued to hear about the wealth of health and wellbeing activities taking place in NHS Libraries across the North of England.

One presentation which stood out to me was by Jenny Emmel from Leeds Teaching Hospitals NHS Foundation Trust (LTH). Jenny spoke about a ‘lucky dip for books’ that LTH had run the previous December. After listening to Jenny’s presentation I was keen to find out more about the practical elements of the promotion, so I contacted the LTH team to find out more.

They kindly answered my many questions and I was then able to put forward a proposal to the rest of the MY Staff Library team. Their feedback was positive, so the planning could begin!

At the beginning of December 10 books were selected for the lucky dip (this was then increased to 15 books mid-month). The books were already in the library and they included a mixture of newer titles and titles which had not been used as often as we would like.

We then wrapped the books up. We decided to include the blurb of the book on the back of each ‘gift’. I was keen to do this as I thought that it might encourage more people to take part. Everyone who borrowed a lucky dip book was also entered into a prize draw.

The promotion was launched on Monday 2nd December 2019 and promoted through various methods including: the library blog, social media, the library website and via the weekly Trust bulletin. 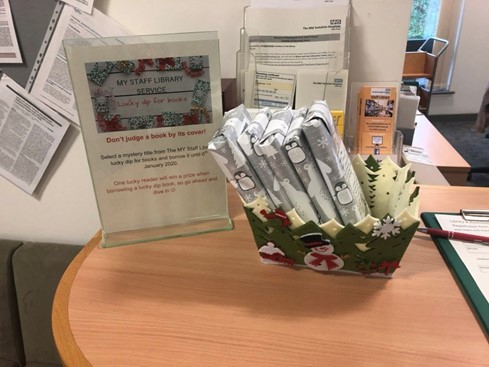 Throughout the month nine readers took part in the lucky dip (four of whom were new library customers). Whilst this wasn’t a significant uptake, I still feel that the promotion was successful as it helped us to raise awareness of our leisure reading collection and increase engagement with our non-clinical colleagues.

So… would we do anything differently? We would try to promote more widely, by ‘popping up’ outside the library, sending out targeted emails to departments and putting up promotional posters in more staff areas to try and increase participation. We will definitely be looking to run a similar promotion again.