Good citizens in a fairer world with libraries as third places

Walking along Oxford Road in Manchester brought back memories of my time studying for an MA in Library and Information Management at Manchester Metropolitan University. I have only visited this part of Manchester a couple of times since graduating and this was my first time on official library business; my first time at the CILIP conference, having received a bursary from CILIP Yorkshire & Humber.

I arrived on Tuesday evening (2nd July) for a lecture on the history of the novel at The Royal Northern College of Music (RNCM). This eased me into the conference by giving me the opportunity to meet other attendees ahead of Day 1. When I arrived at The University of Manchester’s University Place the next day, I was able to find people I had spoken to the previous evening and, having had that little bit of networking practice to warm me up, I felt comfortable approaching other people that I hadn’t met and began starting discussions with librarians from all over the country.

It was a big leap forward from 18th Century fiction to Artificial Intelligence (AI) which was the topic discussed in Kriti Sharma’s keynote. Kriti explained some of the biases that have been identified in AI including facial recognition systems having high error rates for people from BAME backgrounds and recruitment systems not showing women job adverts for senior roles. Kriti said that AI must be held to account and so must its users. A big part of the problem is the historic data sets that include historic bias. We need to be aware of those and make the necessary adjustments so that AI reflects the diversity of its users. 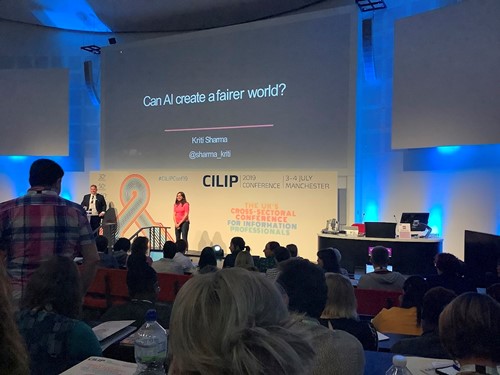 Later in the day, Liz Jolly discussed her career and was candid about some of the difficulties she has dealt with on her way to becoming Chief Librarian at The British Library. She has had to be incredibly resilient and one of the main messages of the session was that the library and information profession needs to be seen as a profession for anyone. The roles we have ultimately serve to improve society and so we need to reflect society. 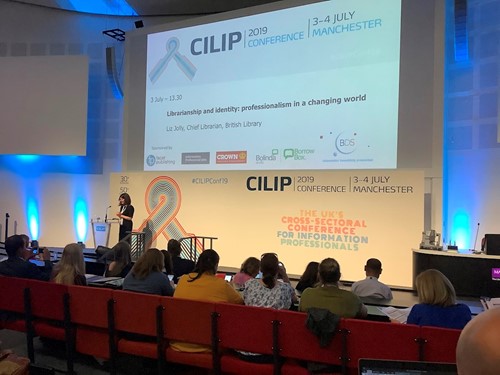 At this point it is worthwhile jumping ahead to Day 2 because Hong-Anh Nguyen from the King’s Fund gave her keynote about diversity. She said that as concepts, diversity and inclusion are having a real moment in our profession and we are reflecting the discussions that wider society is having. Hong-Anh said that we often define racism as individual acts and what is more difficult is to understand how organisations and systems can be racist. She said that strategies are not actions and will not solve the problem on their own. We all need to take responsibility for ensuring our workplaces are diverse and inclusive. I think that both of these keynotes will stay in my mind throughout my career as prompts to challenge colleagues and organisations that fail to recognise the importance of being diverse and inclusive. 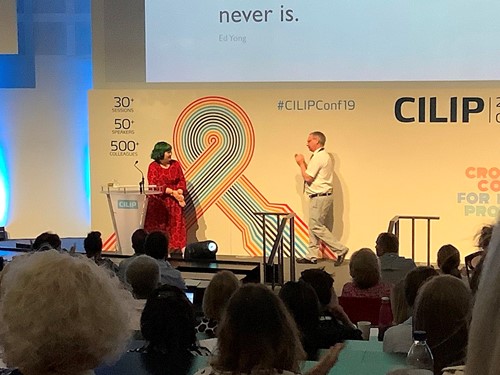 Hong-Anh Nguyen from the King's Fund

There were another two really interesting keynotes on the second day of the conference. Patrick Lambe from Straits Knowledge gave a wide-ranging talk that considered the difference between information and knowledge, the importance of listening and attending in a world that favours speech, our data being exploited by companies, and how librarians exist in an eco-system in which The Good Citizen is at the centre. He also talked about the need for visible performance and having something of the teacher in us. He said that if people don’t remember us then we’re not having influence. He gave the example of successful people praising their school teachers. We also want people to remember the librarians. 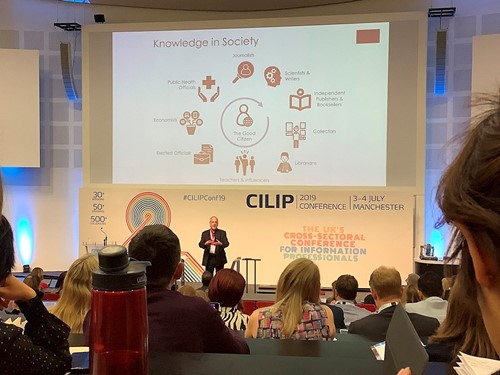 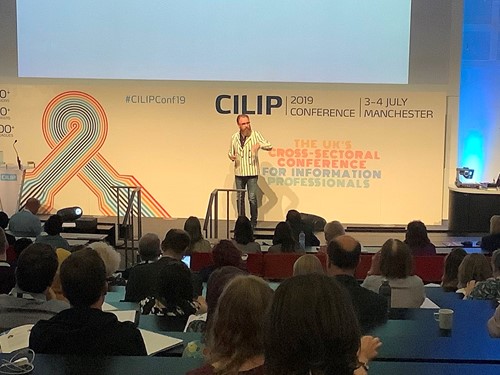 Reflecting on the conference as a whole, I can connect most of the sessions with the idea of adaptability and the need for purposeful change. In some of the panel sessions that I haven’t mentioned, people talked about saying yes to opportunities presented to them within their organisations that might not be viewed by some as library work. Perhaps we need to ask ourselves what the library approach would be to any given organisational issue so that we can demonstrate our value as information professionals in ways that we haven’t done previously. Rather than reacting to technological and societal issues as they present themselves as mainstream concerns, we should be at the cutting edge so that we can offer advice and support to other parts of our organisations and other elements in the eco-system that support The Good Citizen.

I am pleased to report that I now have a new Oxford Road memory; the CILIP Conference 2019. I may have finished the MA five years ago, but the learning never stops. Thank you once again CILIP Yorkshire & Humber for this excellent opportunity.