Its Great Up North – Job Shadowing

When I was offered the chance to attend the Its Great Up North Conference on 6th and 7th June in Harrogate as part of job shadowing, I immediately said yes. Although I work in Health Education England, I am based in the Education Transformation team and had always been interested in what my colleagues in Knowledge Management and Libraries do and thought ‘what better way to find out!’

My excitement then turned to dread however when I realised I would need to network, which up until recently involved one of two things; either standing awkwardly near the refreshments mumbling ‘hello’ at people as they tried to make a drink or standing in the corner waiting until the workshops started. Knowing I needed to change this approach I signed up to Lisa Jeskins webinar on networking and was delighted to discover I wasn’t the only one struggling with this! As Lisa explained how to network and the types of networkers, I felt more at ease going to the conference and hopeful I could approach at least one person confidently!

On the day of the conference, I tried to remember as many of the networking skills as possible as I approached the main meeting point. Any fears of standing alone were dismissed as every delegate I spoke to was engaging and extremely helpful (particularly in explaining any potential acronyms I would come across over the course of the conference!) After an informative keynote speech by David Stewart the first of the days workshops and sessions began. Looking at the options available, I decided to attend a mindfulness session which was a great way to start the day! We learnt how to focus on things in the present rather than getting lost in the busyness of our surroundings and how just taking time to sit and reflect can make you see things differently which since returning to the office has greatly during stressful and busy periods! After all the calm came a break which was a good time to catch up with a couple of colleagues I knew from my office and a few new people I had met that day, comparing sessions and what we had planned for the rest of the afternoon.

In the afternoon I planned to chair one of the sessions (which was definitely pushing me out of my comfort zone as I prefer to be silent at the back rather than telling people ‘5 minutes left!’) the session was presented by Victoria Treadway, Andrew Lambe, Helen Outhwaite and Katie Nicholas and focused on understanding the value of the after action review. To do this, it involved building a tower from spaghetti and marshmallows, evaluating the process and then building the tower again learning from any previous struggles or challenges. As well as being chair I also ended up being a participant! The session highlighted how completing an after action review even midway through a project can really improve a project and enable you make adjustments throughout the tasks to make a positive difference which showed as our team won the most improved award for our second attempt at tower building after planning how to keep the structure sturdy! 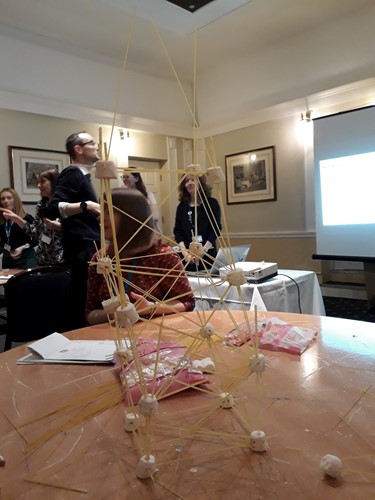 I had almost forgotten in the midst of all the tower building excitement that I had also signed myself up to the randomised coffee trials which are a great way of meeting new people in an informal setting, because who doesn’t enjoy a catch up over coffee and cake? I met with my match at the end of the day and tried to (along with a few others!) complete the quiz which had been included in our brochure when we arrived. It was a great way to break the ice and test our general knowledge skills!

The next day began with presentations. I chose to attend Sinead English’ - promoting the health and wellbeing benefits of our library services which was award winning (more on that later!), I will definitely be using some of the ideas for future teamwork! Helen Curtis’ presentation on art students and the use of art in hospitals, showing the benefits to both staff and patients was insightful. I enjoyed the presentation by Carl Challinor - Improving delivery of healthy messages via innovative presentation and utilisation of health promotion resources. Using memory boxes to prompt events in the past and how they all linked together was interesting plus hearing what some people had donated that was worth more than they thought!

After a short break I then attended another session of mindfulness however this time as Street Wisdom around Harrogate. I had no idea how this was going to go, however others had done a similar workshop in the past and highly recommended it. The session began with relaxing and taking in the sights around us and focusing one particular feature whether it be the texture of the building, the colour of the grass etc. Once we had done this we were then asked to think of a question that had been bothering us or we had been struggling to answer for a while and walk around Harrogate, completely focusing on our surroundings and the question and to see if we could find a solution. I wasn’t entirely sure how this would work as my navigational skills aren’t always reliable so I did wonder whether I would find my way back! The walk did help me clear my mind and gave me a better perspective on the question that I was troubled by.

After lunch it was time for a key note speech on Information literacy and learning for health and wellbeing delivered by Jane Secker, Senior Lecturer Educational Development, University of London and Lisa Jeskins, Independent Consultant. Followed by prize giving for the best poster, minutes of mayhem, quiz winners (which unsurprisingly was not me!) and best conference session. The best conference session was one I attended earlier in the day by Sinead English, which was full of great ideas to promote the library services within the hospital setting and get more people into the library itself. I really enjoyed the session and the ideas that she presented, including an advent calendar that each day contained a motivational/mindful quote and chocolate which proved very popular amongst the staff!

Closing remarks were delivered by David Stewart thanking everybody for attending and promoting the amazing work happening across the North. 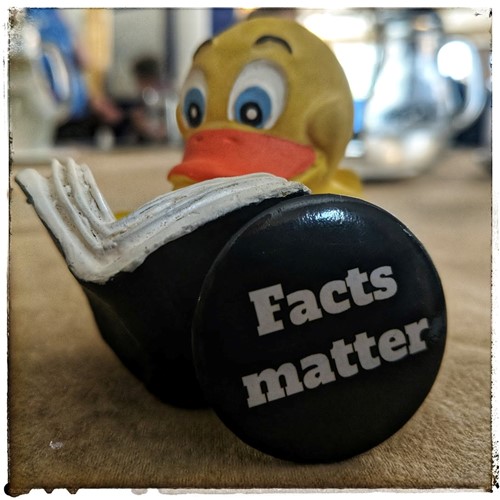 The conference was insightful and certainly gave me a good idea of what Knowledge Management and Library teams do whether they are based in a Trust or at Health Education England. The sessions offered were informative and I was able to take some of the ideas back to my team to implement such as after-action reviews and how we actually use them. I also gained confidence in networking and would volunteer to chair sessions in the future.