June 2019 saw the annual LYNFEST – a celebration of arts and music at Bradford District Care Foundation Trust’s (BDCFT) Lynfield Mount Hospital. This year’s festival had its widest-ever range of activities and events, including displays of service-user artwork, stand-up comedy, open mic, freestyle rap, performance poetry, musical drama, a gardening competition, a pottery workshop and lots of live music, not to mention a ceilidh! 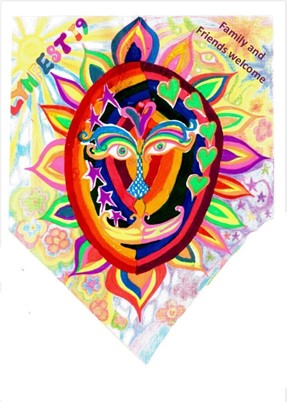 BDCFT library have proactively supported the festival from its inception in 2016 and for the second year running we were privileged to be involved in the creation of a new drama-with-music entitled The Waiting Room. ‘Nobody is nobody’ ran the inclusive strapline.

The central theme of the play, the importance of inclusivity and kindness to our mental health and wellbeing, was collaboratively developed and brought to life by adult mental health service users and hospital staff from a variety of specialisms; Melanie Dawson-Jones (aka Mikey) and I (aka Gareth Rules) trod the boards as part of the ensemble cast. And there was singing – lots of it. It was slightly terrifying and hugely empowering in equal measure.

The other members of the library team were unerringly supportive in allowing us to attend rehearsals.

Last year’s drama offering, The Journey, received a standing ovation at Lynfest, toured across the district and was aired as a radio play by Bradford Community Broadcasting. The drama group also won a National Service User Award.

As well as the explicit aims of Lynfest, which include the benefits of nurturing creativity within all those involved (service users and staff) and recognising those benefits to both mental and social well-being, library staff benefitted enormously from the opportunities for collaborative learning. This process was an integral feature both within and between teams, and between service users and staff. Lynfest was specifically mentioned as an example of good practice within mental health services in our recent CQC Report.

So, librarians, if the opportunity arises, be brave, be bold and get involved. You don’t have to be on stage, there are many other ways to collaborate. You could learn much about yourselves, about the people you work with and the astonishing talent of the people you work to support. As a team it will make you stronger.