Five years ago, a move back up north after the best part of 20 years in London made it logistically and financially possible to fulfil my long held ambition to retrain. I trained as a journalist in my early 20s and had been freelancing part time since having my children but librarianship was always something I was interested in. 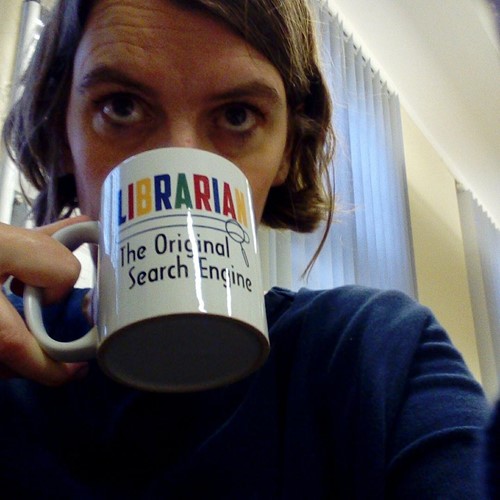 So in 2018 I started the Library and Information Management postgraduate course at Manchester Metropolitan University (as the oldest person on the course. I tried hard not to be discouraged by the act that I was twice the age of many of my fellow students).

NHS librarianship was always at the back of my mind as a career opportunity. The NHS loomed large in my childhood; my grandparents met while working in a hospital during WW2 and both my parents worked in (and met at) an NHS hospital, as did our neighbours and most of the people we knew and my journalism career included a long stint as a health and social care writer.

Various speakers and career day visitors to the MMU course from a variety of trusts, HEE and NHS LKS North really opened my eyes to the available opportunities in the sector and I was impressed by the openness and friendliness of the sector. This was cemented by a placement at a mental health trust library, Manchester Mental Health Trust’s The Curve in Prestwich and further volunteering at the Fairfield Hospital library, one of those run by the Northern Care Alliance LKS, after my course had finished.

Despite having to attend my interview on crutches I was lucky enough to late last year secure my first professional role as an assistant librarian at Wrightington, Wigan and Leigh NHS Foundation Trust. I began work in January and am based at the trust’s Wrightington Hospital library. Wrightington Hospital was the home of the world’s first hip replacement and the hospital and library alike still specialise in orthopaedics and rheumatology.

The library is not in the main hospital building and can be quite hard to find; this, combined with recent staff shortages, have meant that it has been under used recently, but we have plans to improve publicity around the service and relaunch it later this year. I am a lone worker most of the time and having to get stuck into everything from inter-library loans to stock checks is great experience. This combined with training will help me decide how I would like to focus my future career, for example as a clinical librarian or in managing a service.

The trust’s other library is based at the education centre at Wigan, next to the trust’s Royal Albert Edward Infirmary site, so I can always contact colleagues by phone or email, and I frequently go there for training or to help with spikes in service demand, such as when new specialist medical and surgical trainees are being inducted.

I have found NHS librarianship is not well known or appreciated in the wider world - I had to dissuade several friends from the belief that I would be working as a trundler of a book trolley round the wards or in medical records. Retraining in your 40s is daunting enough so I am happy to report that so far it is definitely worth it. I am excited to see how relaunching the service will increase use, as well as taking on further training in areas such as literature searches.