Although not technically a new starter, after moving from Wirral to Chester after almost 16 years is certainly a new beginning. Having qualified in 1999, I worked for Wirral Libraries before moving to Arrowe Park in 2003 to a new Site Librarian role. 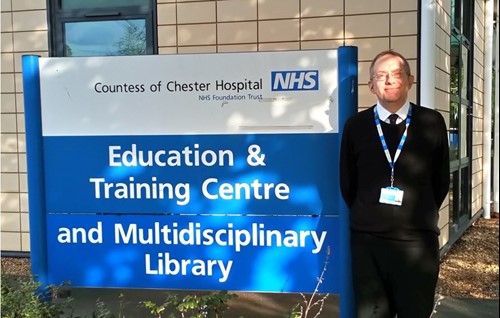 I am still amazed by how much this job has to offer a librarian in terms of increasing their skill set as well as acquiring a knowledge base which you aren’t even aware of until you start to write a handover document. I’m not saying Chartership and Revalidation is easy by any means but there is plenty of scope to compile a portfolio quickly.

It is virtually impossible to stagnate as a NHS Librarian as there is always something around the corner that changes the landscape be it policies, technology or new personnel. Consequently, it was a tough decision to take the step up to the Clinical Librarian role at Chester. However, it was too good an opportunity to pass on applying for it and I was delighted to be chosen as the person to take on the role. I’ve been here nearly 5 months now. When I first started and people asked me how I was getting on, I would tell them how it is both exciting and daunting at the same time. And of course, it still is. However there have been boosts along the way from the ‘Thank Yous’ from the early searches and training sessions to getting a foot in the door of a department for the first time. It’s also very reassuring to know that there is a network of librarians who have been in the same boat and are more than happy to share their experiences.

I’m sure I have lots of challenges ahead but I hope to be inspired by the people that I have learned the lessons from in the past 16 years.