Gil’s Young’s warm invitation to all Northern healthcare library staff to present at “Its Great up North” hit my in-box last November.  It looked really appealing, particularly for new presenters as the emphasis was on a relaxed and enjoyable event for healthcare staff at all levels.  No one could accuse me of being shy, and I jumped at the chance.  The submission process was straightforward, although, note to self, next time draft an initial topic summary and save it somewhere rather than take the “stream of consciousness” approach in the survey form used to collect submissions.  This would have prevented me having to e-mail Gil down the line to ask what on earth I’d said to get me a place when it was time to write the official abstract for the conference brochure.   She kindly re-assured me that I was not the only one who had needed to ask. Ahem.

That is when the support started, and I really began to notice the difference between this and any other event I’ve spoken at.   In truth, the penny had also dropped that although I’ve presented at all sorts of events and conferences before, I knew virtually nothing about how it was meant to be done properly!

In March, would-be presenters were invited to a webinar run by Lisa Jeskins.  This was to discuss what we are trying to do when we present, the three essential components of context, audience and content, and finally, address the importance of preparation and practice, practice, practice. It was conducted using WebEx, and allowed us to make both spoken contributions and respond using the chat facility as Lisa led the session.  It was full of practical tips on planning and executing a talk, some of which really hit home such as consider what your audience will want to learn and why, not just decide what you want to tell them! I do this when designing training materials so I’m not sure why it was something of a revelation where a conference presentation was concerned.   We covered how to structure the talk with a logical flow, and letting background visuals be the backing singers not the star.  Lisa also talking about the importance of putting your audience at their ease, anticipating and preparing for any questions, and finishing with a flourish rather than a fizzle.  We were encouraged to practice in front of a colleague, practice in front of a mirror, record ourselves, whatever, just practice, reflect and practice some more. 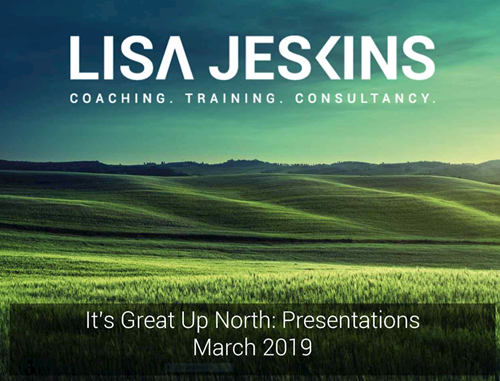 Emboldened by the webinar I decided that my PowerPoint presentation was not going to be the usual set of bullet points hemmed in by logos, but something altogether more visual, engaging and, let’s be honest, fashionable.  But where to start?  I shouldn’t have worried, a few days after the webinar there was another e-mail from Gil, this time with suggestions of books on presenting and presentations in the HCLU staff library, put together by Joanne Phizacklea at Morecambe Bay.  I plumped for The Non Designers Presentation Book by Robin Williams, which turned out to be right up my street as I am SO not a designer. Painfully so.  I made lots of notes, copied some particularly good pages for future reference and learnt some lessons on where I’d been going wrong with PowerPoint all these years. 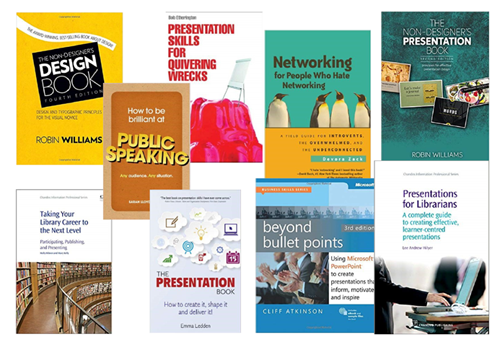 All these and more are available to borrow from library@mbht.nhs.uk

Buoyed up by the course and the reading I’d done, I took a new approach to my presentation preparation.  I began, not by opening Powerpoint like every other time, but with pencil notes of key things to include under headings of What, So what, & What then, in order to make an engaging story.   Next I typed up a script, and identified the sections that would benefit from the addition of some “visual backing singers” to help move the story along.  I found suitable images on Pexels and overlaid them with some key quotes from my talk, adjusted the colour palette on the theme I’d chosen in Powerpoint so it worked with the tones in the photos, and lastly pasted bits of my script into the notes field on each slide.  No bullet points, themed design elements (get me!) and some fireworks to illustrate success, job done!

When the time came to deliver my presentation I felt very prepared, and I know that the things I have learned will continue to improve my presenting skills.  I’m going to take it all forward to the International Clinical Librarians’ conference in Manchester in the autumn where I’ve been accepted to deliver a 10 minute lightening talk.   Having worked in other areas I can honestly say that with regard to continuing professional development – Its Great up North! 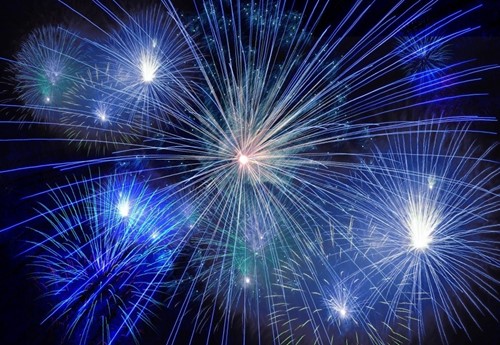