You Don’t Need to Show Everything

How can a person be in many places at once when it’s not possible to go anywhere? I can imagine the character Jonathan Creek using this line whilst pacing around his windmill, but it is no longer the 1990s and the answer is simple; the internet will take you there. Despite the ubiquitous nature of all things digital, there seemed to be a fresh quality to online meetings and training in 2020 that I hadn’t anticipated. I hadn’t heard of Zoom before March and Microsoft Teams was only just on my radar. Nevertheless, they have proved very useful and have allowed me to see and speak with people based near and far without leaving the building.

I understand that there are ways to replace the ironing board and vacuum cleaner in the background with a tropical beach, but my webcam doesn’t appear to have the required definition to differentiate my jumpers from my wallpaper, and a green screen seems a little extravagant. One thing I can do, and recommend, is spending some time editing a recording before sharing it. Recording a session that you are delivering through Microsoft Teams could prove very useful as it may save you from having to repeat the same session. The problem with sharing the video file that is generated is that there is likely to be a minute or two at the beginning in which you are setting up the presentation, checking that the attendees can hear you and asking them to mute their microphones. This can all be cut out by using the video editor within the Microsoft Photos app which is included with Windows 10. If you haven’t used it before, you can find it by using the search bar. Once you add your video to the storyboard, you can then split and trim as required. 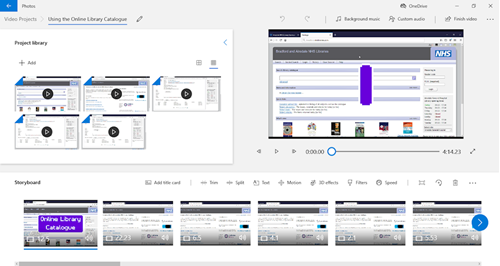 You could simply trim a section at the beginning and end or you could split the video into sections and use the text tool to add titles and captions.

If you want to be slightly more adventurous, you could use the Xbox Game Bar app to record a screen-captured video. Don’t let the name put you off, you don’t have to own an Xbox, this app is also included with Windows 10. 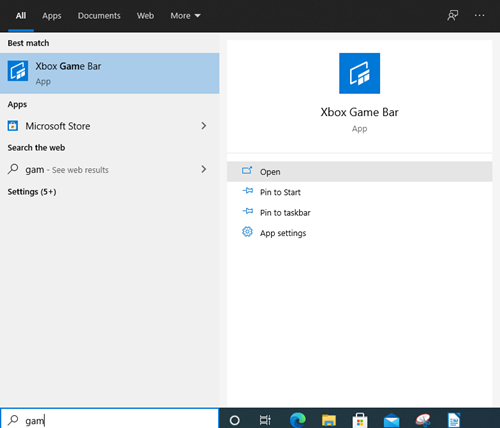 It’s used by people who record themselves playing video games, but it can be used to record yourself navigating a website. I have used it in combination with the Photos app to create several videos including one on how to use the library catalogue. It is similar to using the screen sharing tool on Microsoft Teams, except when using the Xbox Game Bar you can record without broadcasting, so no one is watching you and you can re-record anything you’re not happy with.

To share the videos I made, I uploaded them to YouTube and embedded them on our website. If you just want to share a video by email, uploading to YouTube could still be a suitable solution as it enables you to share a link rather than attaching a large file or asking people to log into Microsoft Teams or Office 365. If you have recorded a video that you want to share with library users and no confidential information is included then you could upload it to YouTube as a Public video or as an Unlisted video. If you choose Unlisted then people will be able to access it from the link you provide them with. There is a possibility it could be found by other people if it gets added to a playlist, but unless that happens it won’t be included in search results. There is also the option to upload a Private video and this means that you can send it to other people but they need to log into a YouTube account to access it.

Using the tools and methods I have described can help you produce videos that look professional, and if you use the Xbox Game bar with only a microphone like I did, you can conceal the setting in which they were made, whether that is a dilapidated windmill or a spare room filled with old tech and VHS tapes.