Change doesn't have to be scary

This Hop Tu Naa (the Manx version of Halloween), there’s been a few spooky changes in Keyll Darree Library. There’s an old adage that Manx people aren’t fond of newness, but our library team always feel better for a refresh, so we’re bucking the perceived trend!

Our first spooky update was to help our users navigate our ghosting policy. We have previously written about our use of ghosting to monitor in-library usage of books, however one of the things we didn’t factor in was the impact this could have on users who were using the same resources over multiple study sessions. Our staff ghost at the start and end of each day, tidying down piles of books from the surfaces and reshelving them, this meant grumpy readers who came back to find their carefully selected pile of books had disappeared!

We wanted to try and tackle this issue and ensure that our users weren’t being forced to find the same resources multiple times, building resentment towards the library. Some users were already writing notes on scrap paper to ask us to leave the books alone, so we thought we could build on this idea and come up with a simple universal sign available to all users. We pondered long and hard, what would signify no ghosting? Then, because we ain’t afraid of no ghosts, we realised!

No more ghosting woes for our users! 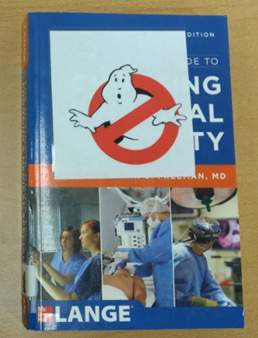 The second of our updates was the library induction. This is something we’ve been trying to shake up for a few years, especially because we have found that an engaging and active induction lends itself to ensuring users feel more comfortable with the layout of the library and associated tasks such as issuing resources. For large inductions we developed a treasure hunt, however, during some lunch time scrolling on Twitter one of our staff stumbled across a tweet about murder mystery inductions. We’re definitely late to the game on this, but being murder mystery champions (undefeated 3 time murder mystery night winners, in fact) we couldn’t pass up the opportunity to have a crack.

One blood stained book, body outline, set of clues, and suspect cards later, we had our own version to trial – just in time for the arrival of the new cohort of pre-reg nursing students.

We wanted to use this as a chance to introduce the Keyll Darree staff (9 suspect cards meant a good spread of library and lecturing staff), and to get students interacting with lots of processes in the library. To solve the mystery each group had to obtain all 9 suspect cards, and all 5 clues. Suspect cards were hidden in a variety of locations to help the students learn the library layout. Clue cards were obtained by doing tasks around the library, finding how to guides, locating books and current journals, and completing a search – active learning to reinforce what students had been shown during the induction.

Library staff checked on the teams throughout the searching stage, making sure that they felt able to ask us for help with queries, and helping us get to know them better. Each team found all of the suspects and clues and successfully solved the crime (it was Mand, in the library, with a book, because of her overdue journals secret). 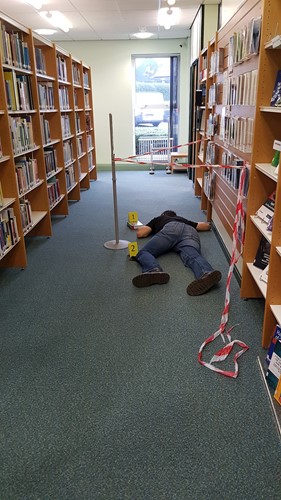 A kind second year volunteered to add some extra realism for us!

Overall this has been a great way to shake up the induction while still maintaining all of the different learning styles we had previously incorporated in the treasure hunt induction. We have repackaged the induction, introduced staff; but retained the overall impactful tasks which help our new students become effective library users.